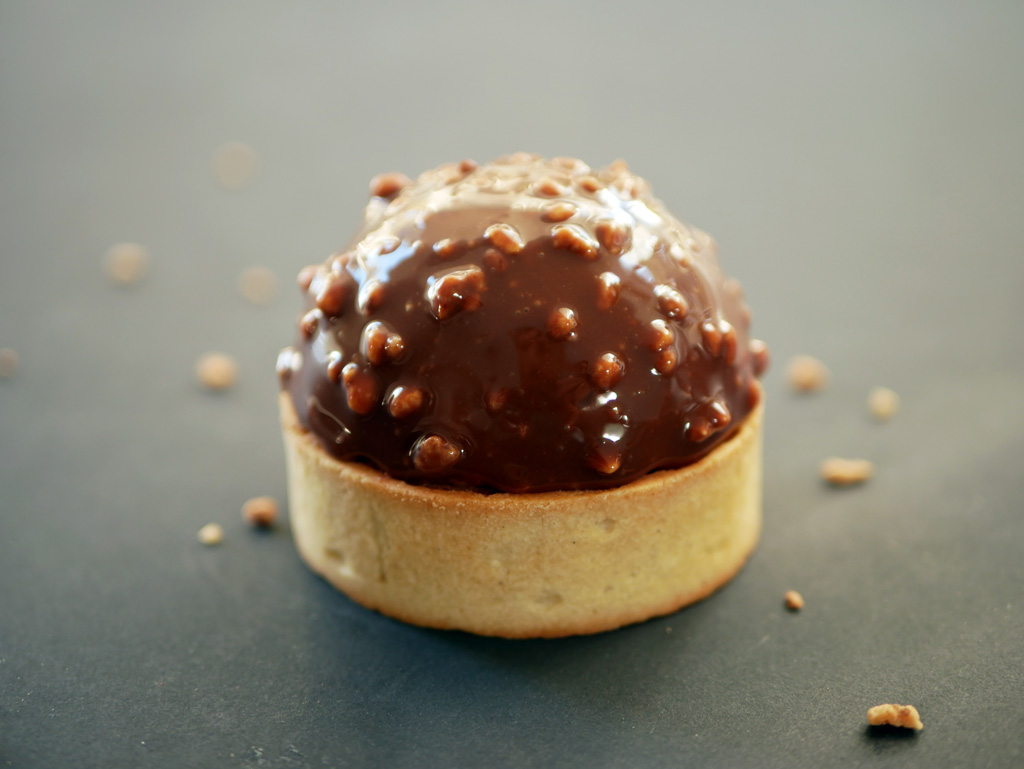 Last year, two friends of mine and I held a little pop-up event together. During the event, I sold 5 different kinds of tartlets. One of them was this Ferrero Rocher tartlet. It was made from a gianduja chocolate mousse with a hazelnut praliné core, covered in a chocolate glaze studded with caramelized pieces of hazelnuts and set on top of a shortcrust pastry, concealing a crunchy chocolaty biscuit with hazelnuts*. Is it complicated? Yeah, a little bit.. Is it tasty? No doubt about it!

In addition to the Ferrero Rocher tartlets, I made four others for the pop-up. The first was a yuzu meringue tartlet. A twist on lemon meringue featuring the rare and wondrous Asian citrus fruit, yuzu, which I used in my very first post in these yuzu macarons.

The second was a festive holiday special: pistachio on the bottom, raspberry chocolate in the middle and a meringue Christmas tree top. The third, a Plaisir Sucré tartlet, featured seven chocolaty layers of bliss. A take on the legendary French pastry chef Pierre Hermé’s “sweet pleasure” dessert. The fourth, an Alfajores tartlet, is based on Argentina’s famous dulce de leche and coconut confection with origins in a medieval Arab cookbook from Baghdad (who knew?).

* I found the recipe for the chocolate & hazelnutbiscuit in Dudu Outmezgine’s book “Inspiration” and it goes wonderfully in thistartlet.

Nutty chocolate glaze: it’s best to prepare the glaze 24 hours in advance for a better coating.

Break the chocolate into small pieces and put them in a measuring pitcher. Keep aside. Put glucose, condensed milk, water and sugar in a saucepan. Bring to a boil while mixing all along. Remove from heat and add gelatin mass. Mix until dissolved. Pour the mixture over chocolate, making sure all the chocolate is covered. Mix a little bit with a spatula and then use a hand blender to blend it to a uniform consistency. Strain the glaze through a sieve into a bowl (to get rid of air bubbles). Cover the surface of the glaze with plastic wrap. Keep in the fridge. When it’s time to use the glaze, warm the glaze to a temperature of 27-30 ºC (81-86 ºF).

In a small food processor, grind hazelnuts to a paste. Transfer into a bowl and add the hazelnut praliné. Put chocolate in a separate bowl. Melt the chocolate on a double boiler. Once the chocolate has melted, remove from heat and pour directly over the hazelnut mixture. Mix well. Fill 6 small cavities of the silicone mold. Keep in the freezer.

Whip the heavy cream until you almost get soft peaks (beware not to over whip, the goal is to get a texture that resembles yogurt). Keep in the fridge.

Melt milk chocolate, dark chocolate and cocoa butter on a double-boiler. Once the chocolate has melted, turn off the flame and add the hazelnut praliné. Mix well. Leave the bowl on the double-boiler to keep the mixture warm.

Put egg yolk, eggs, sugar and water in a stainless steel bowl and whisk until uniform. Place the bowl on a second double-boiler and heat gently (low-medium fire) to 80-82 ° C (176-180 ° F),while mixing all along. Once the desired temperature is reached, strain the mixture immediately into the mixer bowl and whip on high speed for about 5 minutes, until the egg mixture cools. When you drop a spoonful of the mixture into the bowl it should fall back in ribbons and disappear into the mixture slowly.

In the meantime, melt the gelatin mass on a double boiler and remove the melted chocolate from the hot steam. Make sure the chocolate temperature is between 45-50 ° C (113-122 ° F). If needed, transfer the chocolate into another bowl to cool it faster.

Add the melted gelatin mass to the egg mixture and mix a little. Add the warm chocolate and mix until uniform. The texture will become viscous. Remove the heavy cream from the fridge and whip it a little more (remember, yogurt texture).

Fold the heavy cream into the egg mixture in three parts. Place the silicone mold with the large cavities on a tray. Pour the mousse immediately into 6 cavities almost to the end. Give it a little shake to flatten the mousse.

Put flour, almond flour, powdered sugar, salt and butter cubes in the mixer bowl and keep in the fridge for about 10 minutes. Remove from fridge. Using the paddle attachment, start mixing at low-medium speed until the batter reaches sand-like consistency. Make sure the butter chunks are as small as possible at the end of the process without melting the butter.

Add vanilla and eggs all at once and keep mixing at medium speed until the dough starts to form but is not yet completely uniform. Remove dough parts from the bowl and combine. Cover dough with plastic wrap. Roll out the dough a little bit, giving it a rectangular shape. Keep in the fridge for at least an hour. (It’s always better to prepare the dough in advance, the dough keeps for up to a week in the fridge and for about two-three months in the freezer.)

When the dough is stiff and cold, remove the plastic wrap and divide the dough into 6 equal-sized pieces. Leave one piece of dough on the counter top and put the rest back in the fridge. In a cool room,flour the work surface, place the dough on top and dust it with flour as well.Roll out the dough with a rolling pin. Keep turning the dough throughout and make sure it doesn’t stick to the surface. Roll out the dough to a 3-4 mm thickness.

Fonçage: Lightly butter the inner side of the baking rings so that the dough sticks to it. Place the ring gently on top of the dough and cut a larger circle around the ring. Place the ring on a parchment paper and place the dough gently on top of it. Lift the edges of the dough, gently push the rest of the dough down and attach the edges to the sides of the ring, starting from the bottom of the ring to the top.Gently press down on the sides so that the corners at the bottom form a right angle. (It’s not the end of the world if the dough gets torn accidentally. Just attach the sides that have been torn apart and move on). Go over the top of the ring with a sharp knife and remove the excess dough. Put the tartlet crust in the freezer and repeat the process with the rest.

Blind baking: Prick the bottom of each crust all over with a fork and put back in the freezer until the dough is stiff again (about half an hour). Line each crust with a piece of parchment paper.Fill the crust with pie weights or dry chickpeas. Keep in the freezer. Preheat the oven to 170 ºC (340 ºF). When the desired temperature is reached,remove the crusts from the freezer and set them on a baking sheet lined with parchment paper. Place the sheet in the oven and bake for 10 minutes. Remove the baking sheet from the oven and gently remove the parchment paper containing the pie weights (be careful not to break the crust in the process). Put the crust back in the oven and bake for another 8-10 minutes until the crust begins to brown. Keep aside to cool.

Melt chocolate and butter together on a double boiler. Remove from heat, add praliné and mix well. Add the pailleté feuilletine flakes and mix again until uniform. Spread a thin layer of the mixture over each tartlet.

Put chocolate and butter in a bowl and melt together on a double boiler. Keep aside.

Pour the batter into the rectangular baking pan. Place the pan in the oven and bake for about 18 minutes until the biscuit browns and cracks start to appear. Remove from the oven. Separate the biscuit from the sides of the pan using a serrated knife.  Allow the biscuit to cool at room temperature before cutting.

Using a 7 cm round cookie cutter, cut 6 pieces from the biscuit. Insert each piece into a tartlet crust. Push them slightly inwards. You might need to slice off the top of each biscuit a little so that it would have the same height as the crust.

Warm the glaze to a temperature of 27-30 ºC (81-86 ºF). Sift the hazelnut bresilienne to get rid of the powder. Add the sifted hazelnuts to the glaze and mix. Release the mousse domes from the mold. Set them on a raised cooling rack.

Keep the Ferrero Rocher tarts in the fridge in an airtight container for up to two days. 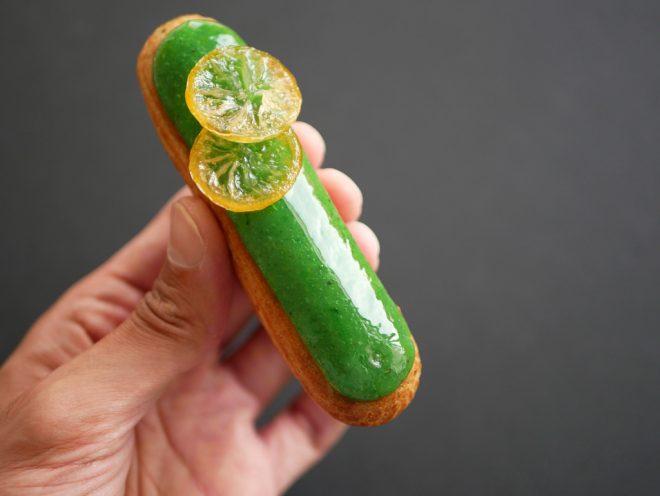 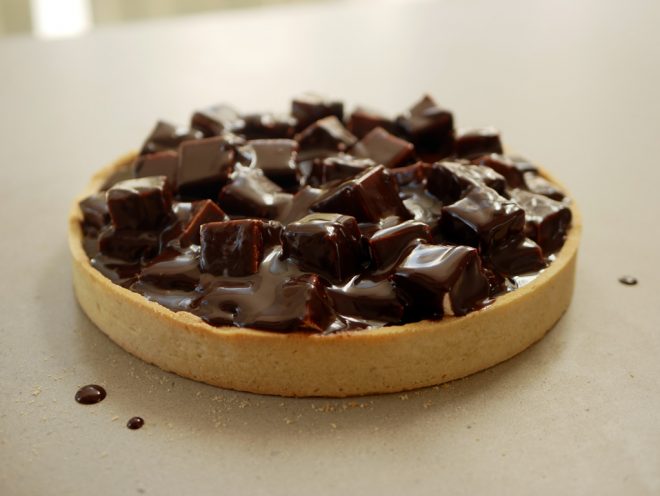 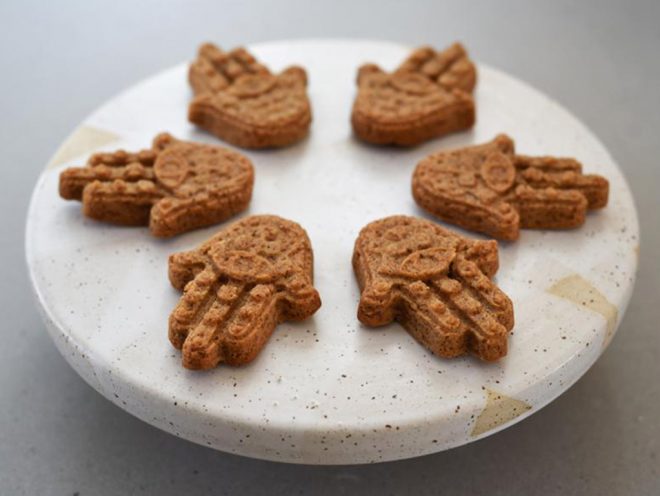