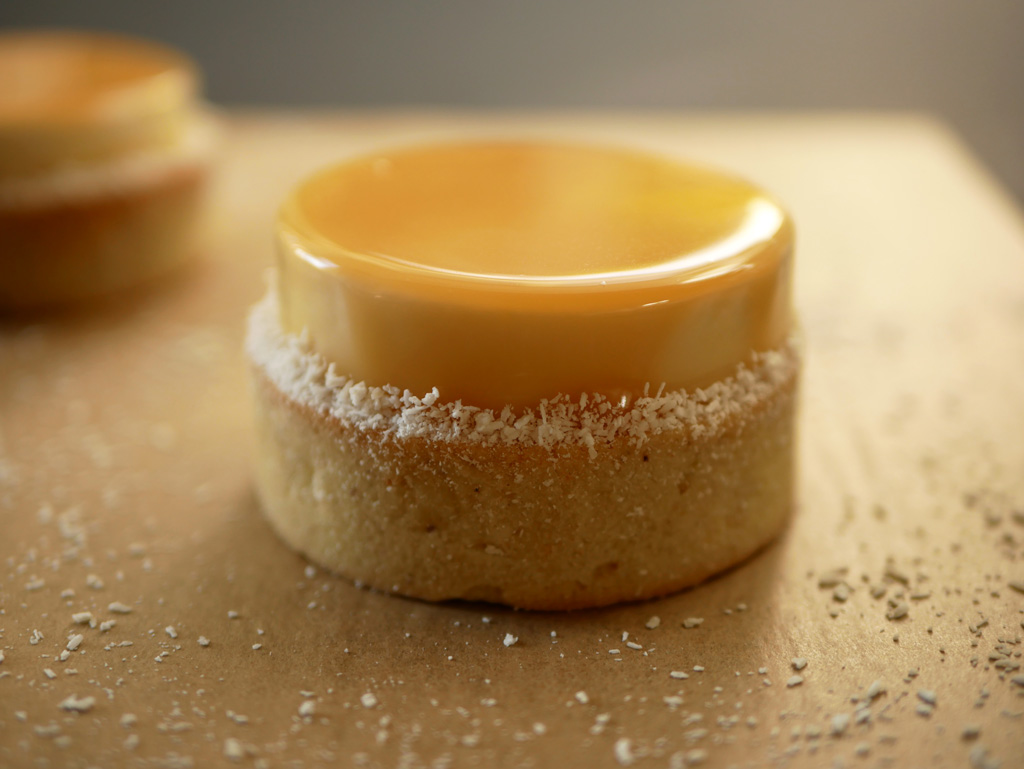 Recently I discovered that the Argentinian cookies Alfajores have Middle Eastern roots with origins from an ancient cooking book from Baghdad of the Middle Ages, just a little over 1000 years ago. (I know, sounds like One Thousand and One Recipes.) The origin of the name in Arabic is al-fakher (الفَاخِر), which means “fine” or “quality” or maybe “praised”.

Kitab al-Tabikh (كتاب الطبيخ‎), or in simple English “The book of the recipes”, contains a series of recipes from Baghdad’s elite, at a time when the city was considered one of the richest in the world.

Between all the recipes and poems praising the food, one may find about 90 dessert recipes, some of them well known today, such as malabi, zalabye, katayef and even “alahu”, the original alfajor supposedly.

Back to now, meet yet another tartlet from the five tartlets I sold at the Pop Tart last year. Similar to the alfajores, which is based on two flaky cookies with dulce de leche in between and adorned with coconut all around, the alfajores tartlet is made of coconut mousse glazed with dulce de leche, on top of a white chocolate disc set on a flaky crust full of dulce chocolate ganache and decorated with coconut.

Don’t worry, you don’t have to take out a loan to buy dulce chocolate (the pretty blond kind). In the recipe I explain how to caramelize white chocolate easily and save some money doing so.

Break the chocolate into small pieces and put them in a measuring pitcher. Keep aside. Put glucose, dulce de leche, water and sugar in a saucepan. Bring to a boil while mixing all along. Remove from heat and add gelatin mass. Mix until dissolved. Pour the mixture over chocolate, making sure all the chocolate is covered. Mix a little bit with a spatula and then use a hand blender to blend it to a uniform consistency. Strain the glaze through a sieve into a bowl (to get rid of air bubbles). Cover the surface of the glaze with plastic wrap. Keep in the fridge. When it’s time to use the glaze, warm the glaze to a temperature of 27-30 ºC (81-86 ºF).

Put water and then sugar in a saucepan. Place on medium heat. Stir the sugar with a spatula to dissolve it. Once the water starts to boil, stop stirring and remove the spatula. Let the syrup boil and check with a thermometer that the temperature does not exceed 115°C (240°F).

While it’s boiling, whip the egg whites in a mixer on medium speed. When the syrup reaches 105°C (220°F), increase the speed of the mixer so the egg whites get to soft peaks (white foam consistency).

Prepare the small rings: cover the bottom of each ring with plastic wrap by pulling and attaching it to the sides to form a flat sealed bottom. Place the rings on a flat tray.

Put the coconut puree in a saucepan. Mix corn starch with a bit of coconut puree and then add it to the saucepan. On medium heat, bring the mixture to a boil while whisking all along (be careful not to burn the bottom).

One it starts to boil, remove from heat. Add gelatin mass and mix until it dissolves in the mixture. Transfer the mixture into a clean bowl and let it cool to a temperature of 40°C (104°F) or below.

Whip the heavy cream with a whisk until you almost get soft peaks (beware not to over whip). Fold it into the coconut mixture in two parts. Pour immediately into each ring and flatten the surface with an offset spatula.

Keep in the freezer for a few good hours until it’s easy to release the mousse from the rings (by rubbing the sides of the rings with your hands to warm it up a bit and release it gently).

Put flour, almond flour, powdered sugar, salt and butter cubes in the mixer bowl and keep in the fridge for about 10 minutes. Remove from fridge. Using the paddle attachment, start mixing at low-medium speed until the batter reaches sand-like consistency. Make sure the butter chunks are as small as possible at the end of the process without melting the butter.

Add vanilla and eggs all at once and keep mixing at medium speed until the dough starts to form but is not yet completely uniform. Remove dough parts from the bowl and combine. Cover dough with plastic wrap. Roll out the dough a little bit, giving it a rectangular shape. Keep in the fridge for at least an hour. (It’s always better to prepare the dough in advance. The dough keeps for up to a week in the fridge and for about two-three months in the freezer.)

When the dough is stiff and cold, remove the plastic wrap and divide the dough into 6 equal-sized pieces. Leave one piece of dough on the counter top and put the rest back in the fridge. In a cool room, flour the work surface, place the dough on top and dust it with flour as well. Roll out the dough with a rolling pin. Keep turning the dough throughout and make sure it doesn’t stick to the surface. Roll out the dough to a 3-4 mm thickness.

Fonçage: Lightly butter the inner side of the baking rings so that the dough sticks to it. Place the ring gently on top of the dough and cut a larger circle around the ring. Place the ring on a parchment paper and place the dough gently on top of it. Lift the edges of the dough, gently push the rest of the dough down and attach the edges to the sides of the ring, starting from the bottom of the ring to the top. Gently press down on the sides so that the corners at the bottom form a right angle. (It’s not the end of the world if the dough gets torn accidentally. Just attach the sides that have been torn apart and move on). Go over the top of the ring with a sharp knife and remove the excess dough. Put the tartlet crust in the freezer and repeat the process with the rest.

Blind baking: Prick the bottom of each crust all over with a fork and put back in the freezer until the dough is stiff again (about half an hour). Line each crust with a piece of parchment paper. Fill the crust with pie weights or dry chickpeas. Keep in the freezer. Preheat the oven to 170 ºC (340 ºF). When the desired temperature is reached, remove the crusts from the freezer and set them on a baking sheet lined with parchment paper. Place the sheet in the oven and bake for 10 minutes. Remove the baking sheet from the oven and gently remove the parchment paper containing the pie weights (be careful not to break the crust in the process). Put the crust back in the oven and bake for about 8 more minutes until the crust begins to brown. Keep aside to cool.

Transfer the caramelized chocolate into a measuring pitcher, along with the dulce de leche and the butter. Bring the heavy cream to a boil and pour over chocolate, making sure all the chocolate is covered. Mix a little bit with a spatula and then use a hand blender to blend it to a uniform consistency. Pour the ganache into each crust almost to the top. Keep in the fridge and let the ganache set.

Take a flat baking sheet and wipe its surface with a damp towel. Place an acetate sheet* on the damp surface (moisture allows it to stick to the surface). Go over the top of the sheet with a dry paper towel to remove air bubbles and to straighten it.

* You may replace the acetate sheet with parchment paper (with no folds) or plastic wrap. You will lose the shine of the chocolate this way, but it’s not important in this case. Just make sure that the paper/wrap is set to the surface somehow.

Temper chocolate following this post. Once the chocolate is tempered, pour it to the center of the sheet. Using a large offset spatula spread the chocolate across the sheet (up a bit, down a bit, and then sideways) to get a thin and uniform layer. Avoid moving the spatula over the chocolate more than once or twice.

Give the chocolate a minute or two to set, just until it’s almost dry to the touch. Using the 7 cm cookie cutter, cut 6 chocolate circles.

Remove the crusts from the fridge. Place a chocolate disc on each one. Warm the glaze to a temperature of 27-30 ºC (81-86 ºF). Release the mousse from the rings. Set them on a raised cooling rack.

Transfer the glaze into a measuring pitcher. Pour the glaze on top of each mousse to get a thin uniform layer. Gently remove the excess glaze on top using a small offset spatula.

Slide a small offset spatula under the mousse and move the mousse around on the cooling rack to get rid of the excess glaze on the bottom.

Lift the mousse with the spatula and place it on top of the crust. Decorate with coconut flakes around the mouse. Keep the alfajores tartlets in the fridge in an airtight container for up to two days. 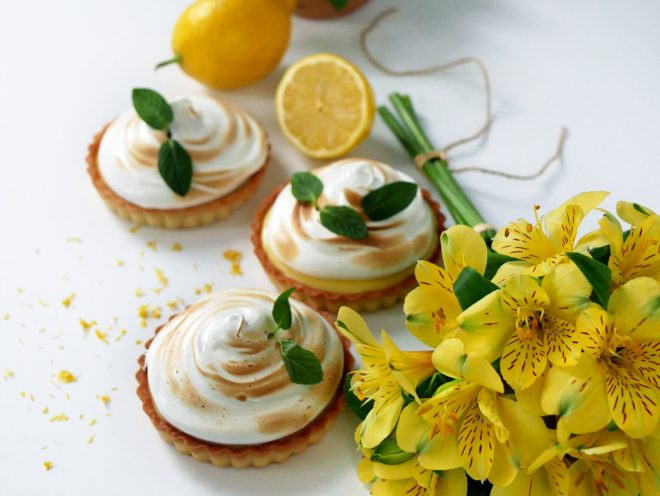 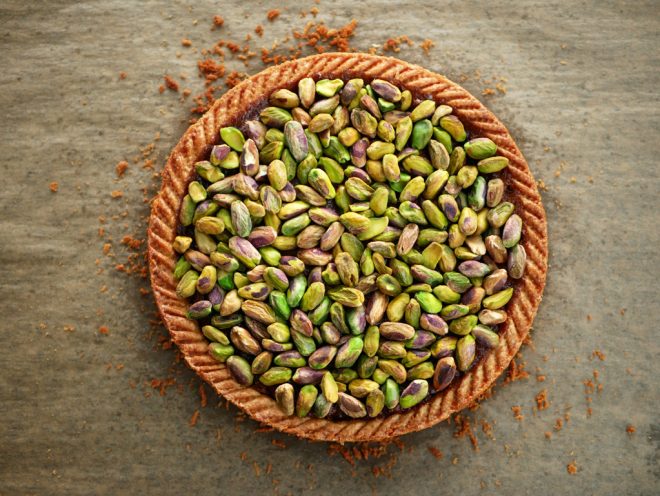 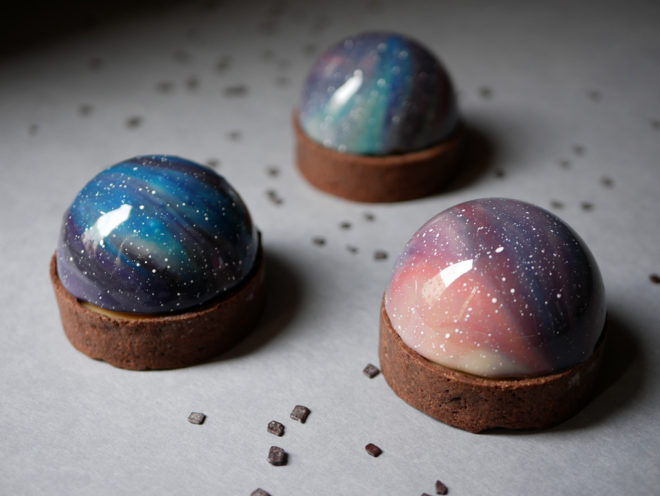